After the success of the Wii, high expectations were on Nintendo’s shoulders to make the next big thing in gaming. The company had to decide whether to create the Wii U to be alike the Wii and keep their casual gamer audience, or work on more conventional gaming alike the PlayStation 4 and Xbox One. Shigeryu Miyamoto, who designed the console, planned for the system to support full HD and 3D capabilities to keep up-to-date with the latest television hype of the day. This lead to high demands from Nintendo and the Wii U team to create a top of the range console.

The Wii U became the first Nintendo console to gain HD capability, which was a generation behind its competitors as the PlayStation 3 already had this. What is innovative about the design of the Wii U is the GamePad, which is the primary controller of the system. The touch screen controller can allow the player to play only on this screen if so wished, if the Wii U console is turned on.

As with the other consoles of its era, the Wii U has online capabilities featuring the companies own network (Nintendo Network) and social network (Miiverse). As well as this, the Wii U can also stream television shows and films through Netflix, Love Film, Hulu, YouTube and many more.

Another example is the Nintendo Tvii app that allowed program listings from the users TV provider to be streamed through the console. It further allowed integration with IMDB, RottenTomatoes and Wikipedia. Social connectivity through FaceBook, Twitter and the Miiverse was available. This app only remains active in Japan as it was discontinued in North America and due to technical issues never released in Europe.

Although proving itself to the logical step up after the Wii, Nintendo’s latest home console is highly criticised. The main complaints of the system including a weak line up and limited games library, combined with a ultimate lack of purpose and little 3rd party support due to initial low sales and consumer support. So low, in fact, that upon announcement Nintendo’s shares dropped by 10%.

After the initial success of the Wii, around 2010 rumours started to come about regarding a successor to the 2006 home console. Little did they know, Nintendo had been in talk and in the developing stage of their next home release.

The console was announced at E3 in 2011, where the tablet controllers were shown to many fans and sceptics alike. This has been heavily criticised as many feel like the tablet element should not have been the main element that was exposed during E3, furthermore, there was a severe lack of 1st party games presented at the press conference, which led development companies to doubt the new console. The selling point of the Wii U was the unified online system (Nintendo Network) which would allow effortless multiplayer, add-on content and online distribution of apps and games.

Upon release of the game there were two bundles that one could buy: The Basic and Premium (called deluxe in North America). The Basic package included the White Wii U with 8GB of storage as well as the GamePad, Stylus and HDMI cable.

The Premium/ Deluxe bundle gave the buyer a black console (32GB) with the corresponding GamePad, stylus and HDMI cable as well as a premium subscription to the Nintendo Network, stands for the console and the GamePad, controller, sensor and a copy of NintendoLand.

Other bundles were available including a limited edition ‘The Legend of Zelda: Wind Waker HD’ deluxe set. Including a black console with 32GB storage, a Wii U GamePad decorated accordingly with the golden triforce and a download code for the game.

Primarily, the GamePad controller acts as the remote for the console, with the ability to use two screens or either the TV or controller alone.  When playing multiplayer games, the GamePad could act as a screen to show another element whilst the other players used normal Wii controllers. An example of this is in Mario Party where the GamePad shows Bowser locked up in a cage until released.

Alongside this, the Wii U Pro-Controller was released for dedicated gamers. Shaped like Xbox and PlayStation controllers, the Pro-Controller was designed for optimum gaming with an astounding 80 hour battery life compared to the GamePad’s 3.5 hour life.

The Wii U has the smallest games library of any Nintendo console. Games are either downloadable from the eShop or through purchasing from another store.

Games from Nintendo’s flagship franchises such as Mario, Donkey Kong, The Legend of Zelda, Wii Sports Club, Wii Fit U and Wii Party U. Mario Kart 8 is the consoles best-selling game to date and spiked sales for the console upon release. 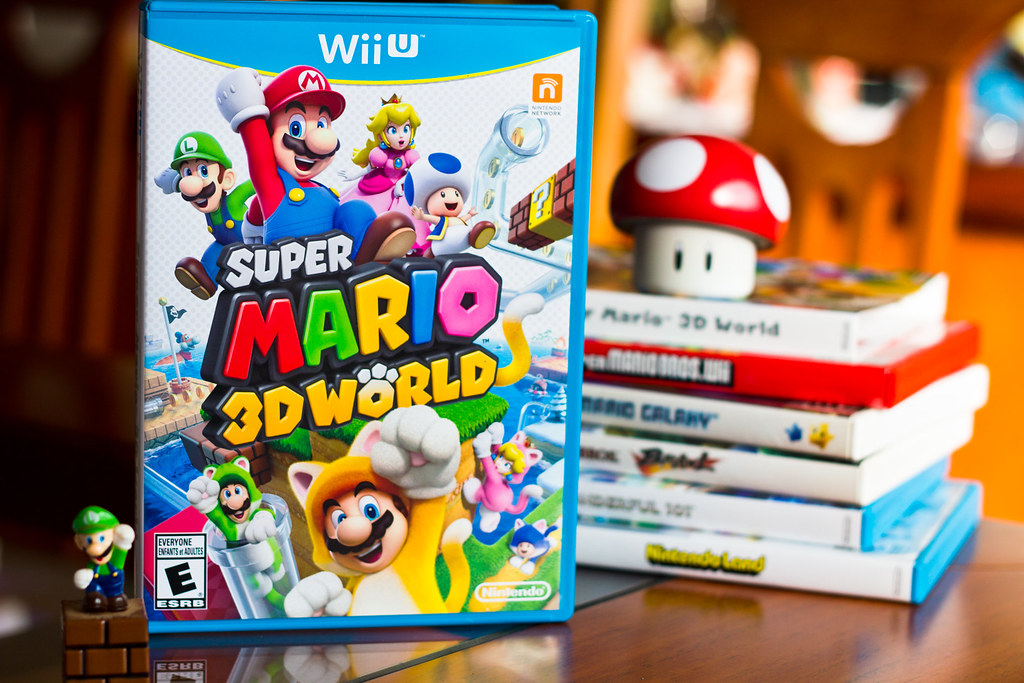 One of the reasons why the Wii U suffered was due to lack of third party support. EA publically showed their frustration for the console and announced that they would only be announcing few titles with their priority being the PlayStation 4 and Xbox One. Other companies such as Bethesda stopped producing games for the system altogether. Nintendo faced larger problems when the UK’s second largest supermarket, Asda, refused to sell the console and would only sell a few, select titles.

Released this year, the Nintendo Switch has succeeded the failing console. Many of the planned releases for the Wii U have been scrapped in favour of Switch release, which has led many to believe that the distribution of the Wii U will end in coming months.

Although many were wary of the Switch after the Wii U, the console seems to have redeemed the public’s faith in Nintendo so far.